Although we think of the west as new, it’s only new to the United States. Many native cultures and the Spanish Empire traipsed across the Southwest for centuries and millennia before it was the American frontier, and their legacy remains. As an easterner, nowhere I’ve ever lived had that depth of surviving history. I still have a lot to learn.

The Mogollon (roughly pronounced MUH-guh-yun) Culture was one of three ancient cultures in the southwest, along with the Pueblo and the Hohokam. The Mimbres branch of the Mogollon lived in southwest New Mexico. The people of the Gila Cliff Dwellings only lived there for about a generation, likely driven there by desperation. Compared to Chaco Canyon and Mesa Verde, the Gila Cliff Dwellings are quite small. The culture disappeared from the region shortly thereafter. But their pottery remains influential today, over 500 years after the culture that produced it collapsed.

Mimbres pottery is astonishing. Many southwestern cultures have beautiful pottery with rich design and symbolism. Mimbres pottery is different. It depicts compelling geometric abstractions of animals and people, employing artistic devices not seen in European art until this century.

The Maxwell Museum of Anthropology in Albuquerque has a nice collection; I picked up a great book of designs in the gift shop, Mimbres Classic Mysteries by Tom Steinbach Jr. Most books about Mimbres pottery show photographs of the works. This book shows the designs themselves, which are brilliant. All images in this post are from that book.

Sandhill crane design, almost like something from the art deco movement.

Humorous design featuring a great blue heron, with the fishes hiding in the one place the heron’s neck cannot reach. 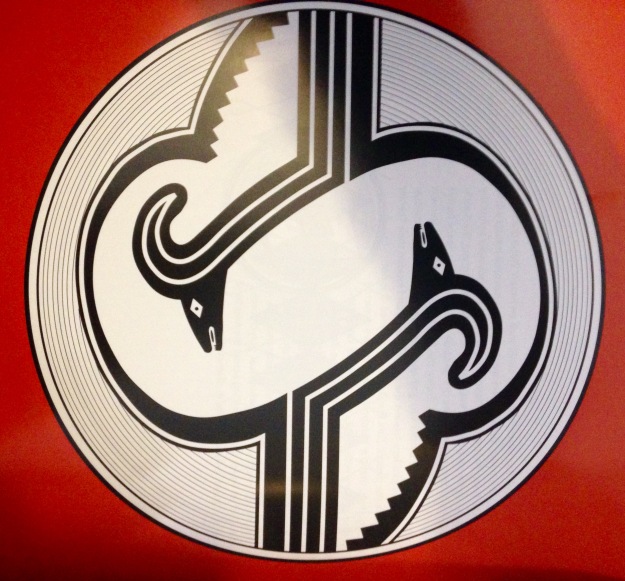 Man/crane design. The author suggests it looks like a Picasso. I am struck by the use of negative space.