Wide-angle lenses are lenses that, as the name suggests, capture a wide angle of view. They’re great for fitting a wide scene into a single shot. A wide-angle lens can catch a long parade marching down the street, spreading to left and right; it can catch a massive sprawling mountain range.

Wide-angle lenses can be tricky, too. Humans don’t see in wide angle, so these images are distorted and unnatural to our eyes. Sometimes, that’s a feature.

Large things loom. Whether that large object is your parents when you’re a child, a huge skyscraper, or a thunder cloud, big objects have a sense of hanging over you. Wide-angle lenses can capture that sense, even for modestly-sized objects.

Below is a shrine at the Albuquerque Botanical Garden Japanese Garden. It’s maybe 15 feet wide and 15 feet high. But with the help of wide angle, it can fill a whole frame. The top frame is as a 16mm wide-angle lens captures the shot. All the lines that should be straight are curved, because this lens is a type of wide-angle lens called a “fisheye”. This could be the desired effect, or you can correct the curvature, as in the second picture. This time, I was pursuing the second image. Sometimes, the other is the goal. That’s one cool thing about digital photography–both are available in any given image. 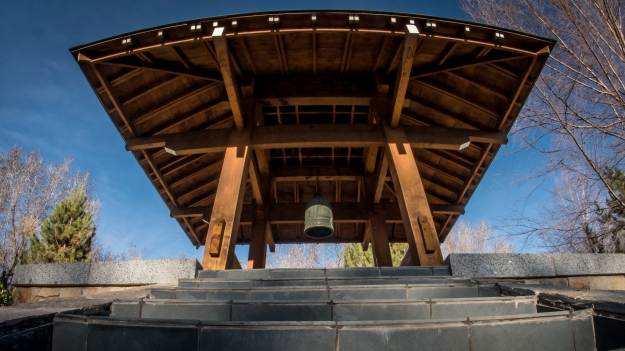 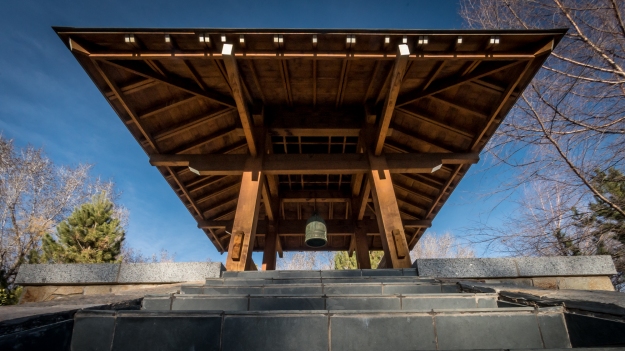 This one’s obvious, but still awesome. Some images need a lot of space. Sometimes, you can get a wide-angle image by stitching several traditional images together. But as in the top image, only a single capture can catch the ducks taking flight.

In the bottom image, the angular distortion from the fisheye lens is fine uncorrected, because there are no straight lines on that rock to betray the distortion. And the wide angle here allowed me to get the sun in the frame. The distortion to the sun here is called a “sunstar.” You can get them by shooting with small apertures, which leads to light diffraction. Here’s a nice brief article if you want to learn more about sunstars.

The pond at the Japanese Garden

A rock formation at Bisti Badlands

Wide-angle lenses give a photographer different options in guiding the viewer’s eye in a photograph. You may have heard that long lenses compress depth, thus why they are pleasing for portraits. Wide lenses exaggerate depth. The righthand side-view mirror on cars is slightly wide-angle. This is why “objects may be closer than they appear.” Your side-view mirror has exaggerated the sense of depth.

Additionally, wide-angle lenses can focus on nearby objects. My 85mm lens has a minimum focal distance of 1 meter. My 70-200 varies from 1 meter to 1.5 meters. My fisheye can focus nearly up to the point I bump into the subject.

Both of these factors give the photographer different creative freedoms when composing with a wide-angle lens.

In the first image, I found this hanging rock fascinating. I put my lens right next to this rock when I shot, but because of the exaggerated depth, it doesn’t feel as claustrophobic as the shot was. The rocks in the background are only a few feet away, but they feel more distance. Here, I also employ the wide angle to make the rock loom large. That hanging arm was no more than 3 feet long.

In the second image, the ability to get close to the statue in the foreground meant I could fill more of the frame with it. And I can fit the building comfortably in the background. So I can make a relatively small object the same size in the capture as a large object. 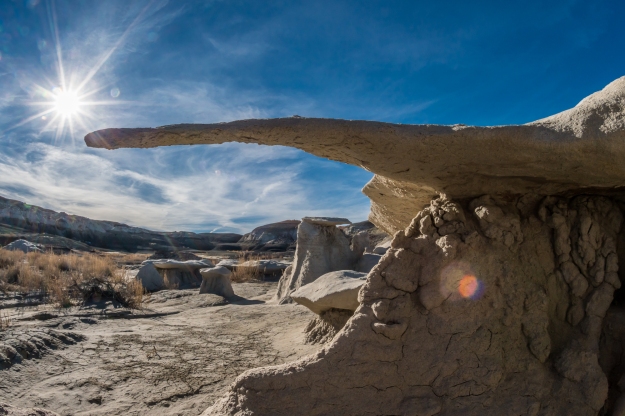 Rocks and sun at Bisti Badlands

University of New Mexico campus, and statue of school mascot, the Lobo

Did I miss anything? I love a good photo discussion, so let me know!