The western sky is as vast as the western landscape (that I have admired in so many other posts). It’s full of dramatic colors and exotic clouds. And because I am a geek, I bought a book about collecting clouds, The Cloud Collector’s Handbook.

I was inspired to buy this book after seeing several lenticular clouds. Lenticular clouds, sometimes mistaken for UFOs, look like giant horizontal lens in the sky, thus the name. They’re beautiful. Here in New Mexico, I see them over the tops of mountains, just hovering there. Unlike other clouds, lenticular clouds tend to stay in one place. That’s because lenticular clouds have an interesting formation mechanism.

Standing wave example in the surface of a drum (Wikipedia). Note that the maxima doesn’t travel in space, it just oscillates in magnitude.

So, lenticular clouds are standing wave patterns in the sky, made visible by the condensation of water. They stay put because that’s what standing waves do. They tend to form over mountains or hills because these structures disrupt the movement of airflow and cause eddies that sometimes lead to lenticular clouds. If you have ever watched a flowing river and observed a whorl behind a log or rock, well, a lenticular cloud is like that, but in the sky. Pilots avoid them because of the strong winds that create them. Though they look serene, they are not!

Below are some great example pictures that aren’t mine. This time of year, lenticular clouds are rarer, and I was too busy gawking this summer to take pictures. So as the spring winds and summer rains of the west approach, keep on the lookout for lenticular clouds. I will be! 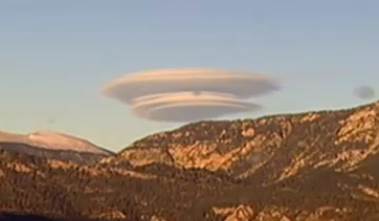