In 1915, my great aunt Gudrun died of type 1 diabetes at the age of ten or eleven. It was one of those family health tidbits to mention to the doctor and little more. Insulin injections weren’t developed until 1922; before that, the disease was a death sentence.

A few weeks ago, I got to see Gudrun’s postcards. They were passed down through the family, but I had never seen them before.

The oldest postcards go back to 1909 or so, when Gudrun would have been 4 or 5. They’re from her sisters, who worked in big city Minneapolis, or her school mates. Many of them are undated and probably delivered by hand, as they have no stamps or postmarks. Many of the dates on the postmarked cards aren’t legible. 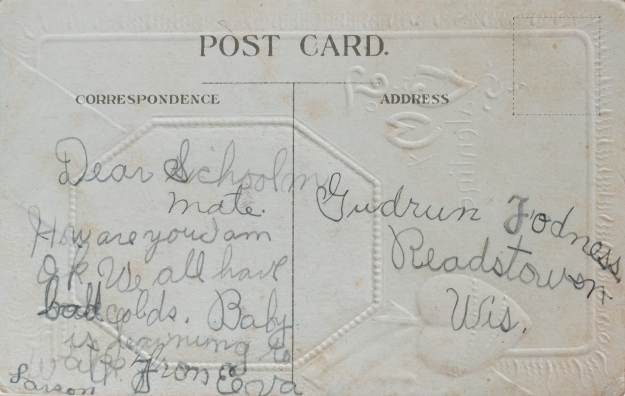 Dear School mate. How are you. I am ok. We all have bad colds. Baby is learning to walk. From [unreadable] Larson. 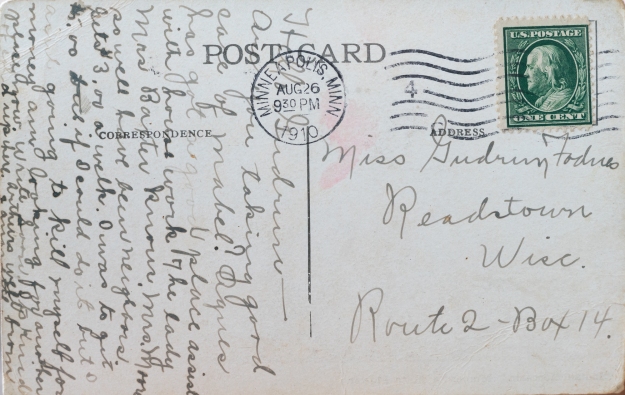 “Hello Gudrun–Are you taking good care of Mabel [my grandmother, who was an infant]? Agnes has got a good place assist with house work. The lady Mrs Baxter knows Mrs. Moore so well have been neighbors. Gets $3.00 a week. I was to get $5.00 but if I could do it but I ain’t going to kill myself for money am looking for another place now. Write soon. It’s kind of cold up there and [indecipherable]”-Unsigned, probably a sister in Minneapolis.

The last postcards are postmarked around Christmas 1914. I haven’t been able to find records of when Gudrun died, just that the year was 1915. Many of the postcards ask after Gudrun’s health, even well before she would have been ill. Health comes up in many of the postcards between six and seven year olds. Health was different in that era. One of Gudrun’s sisters would die from pneumonia a few years later as a high schooler. [Correction: the girl who died from pneumonia was my grandfather’s sister. One of Gudrun’s sisters died of an ear infection in the 1930s.] One of her brothers later died from an infected cut.

Postcards seem like they were routinely exchanged between young children. The spelling and handwriting on many of the cards is very young. Mail and trinkets of the greater world were probably a huge thrill in rural Readstown, Wisconsin, a town of 515 in 1910. Gudrun lived on a farm, and probably most of her classmates did too. Because many of the cards are undated, it’s hard to establish a time line. Did her classmates write more to her as she became ill? They sent cards for every holiday. There are birthday cards, Valentine’s cards, Thanksgiving cards, Easter cards, New Years cards, and Halloween cards. Many are un-themed. Sometimes a little friend sent a holiday card at an odd time, apologizing that it was the only card they could find.

We don’t know how long Gudrun was ill before she succumbed. Online resources suggest children lived from a few weeks up to a year. Around the time of Gudrun’s illness, doctors began to advocate a starvation treatment to reduce sugar levels and prolong life. In rural Wisconsin, Gudrun probably didn’t follow such a course of treatment, but maybe the general concept was present. Since ancient times, diabetes had been described for the sugary taste it gave to a victim’s urine, so the connection to sugar was well-known.

There’s a lot we don’t know about Gudrun. We don’t have any of the cards she sent. All of her correspondents and siblings are long dead. I look at her and wonder about her and what her life was like. The postcard designs are an insight into Gudrun’s era as well. Some feature Norwegian; she probably spoke some. The handwriting is exclusively in English. All but two or three feature illustrations rather than photos. Some have metallic foil and embossing. Some have half tone designs. I picked a few of my favorites.

Gudrun died over 70 years before I was born. What a wonderful record of her community and family and friendships this collection of cards is. Her life and death over a hundred years ago feels real through it.