I wrote this prompt while looking at the image below, which I made for my worldbuilding exercises, discussed here. 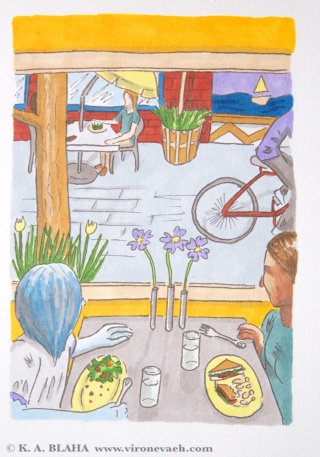 Enh and Della sat at the table, staring out the window rather than at each other. Enh hadn’t seen Della in fifteen years, not since that terrible night. And now they sat in a beautiful café, staring out at the sea rather than talking. Out of the blue, Della had contacted her two days before. She still hadn’t explained why, and Enh was growing uncomfortable. In the distance, a sailboat skating gracefully by. Enh wished she were there. Anywhere but here.

“It’s good to see you again, Enh,” Della mumbled again. Enh just nodded this time. Della’s voice, so distinctive, was unchanged, and she mumbled just like she had so many years ago. She paused for a long time. “Don’t you have anything to say to me?”

Enh sighed. “You contacted me. And you still haven’t told me why yet. I didn’t come here to reminisce. I came here because to asked me to, and I’d prefer you get to the point.”

Della’s eye’s narrowed. When she was young, she might have cried, but evidently she was past that. “You always make everything hard. Fine, I’ll just say it. I found out that Intira might be alive.”

Enh dropped her fork. Visions of that night came unbidden. The night they found the bike on the beach, but not Intira. Intira’s angry note, condemning all their undermining, how they had never really been friends. A man who’d seen her running into the ocean. Her clothes, found a month later on the coast.

(As it happens, the end of this prompt became inspired by another illustration, see below.)