The western landscape is absurd. There are massive towers of rock, ancient ruins, and strange colors. There are fields of lava and dunes of drywall. In a recent post, I talked about how the west evokes much of the science fiction I read. Well, I went driving again, and I found more science fiction in the west. Specifically…

Carlsbad Caverns lie under southeast New Mexico. At any moment, I imagined that goblins would pour out of the ceiling and down columns around me. Carlsbad evokes visions of Journey to the Center of the Earth, Cthulhu, and Middle Earth. Right now, the elevators at Carlsbad are offline, so you must walk down into the gaping natural entrance. If you are a science fiction enthusiast, it’s hard to escape the feeling that you are on a journey to somewhere of lore. 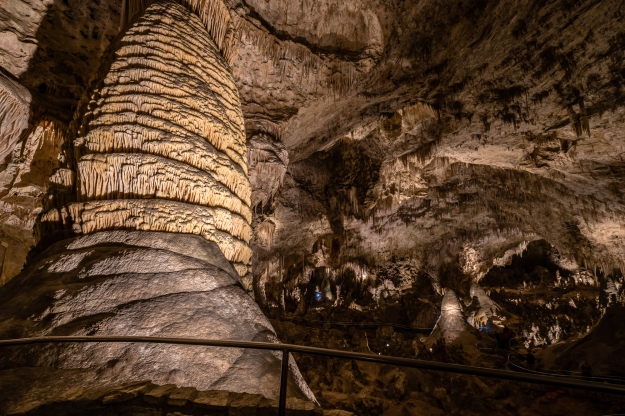 The Great Room in Carlsbad Caverns.

There are some silos out west that look exactly like daleks. This one is by the city of Alamogordo. Nearby, I found a scrap yard full of derelict missiles and circuitry. Seriously, where does one find a silo shaped like a scifi creature next to cruise missiles other than science fiction and the west? (Okay, maybe the Ural Mountains.)

At first, it seemed rather extraordinary to find a missile sitting in a scrap yard a mile outside a mid-sized city, but this is the storage yard for the New Mexico Museum of Space History.

Still, I prefer to think that giant daleks roam New Mexico, and they have missiles!

A real life Canticle for Leibowitz

East of Albuquerque is the Salinas Mission National Monument, a set of three missions from the 1600s. The sites were inhabited by pueblo indians going back centuries. After the Spaniards arrived, they built missions to convert the indians. They also functioned as part of the salt trade, which is where the name “Salinas” comes from. After the pueblo revolted in the late 1600s, the sites were forgotten, and only rediscovered in the mid 1800s.

I visited the Gran Quivira site this weekend. It contains a pueblo village that once held 2000 people, a completed church, and an extremely large incomplete church that was in construction at the time of the revolt. From the site, you can see for miles around. There are a few ranches, but few other signs of inhabitance.

As I mentioned in my last post, I just reread A Canticle for Leibowitz. And wow did Gran Quivira evoke the book. The ruins of a church next to a town, just like the abbey next to the town of Sanly Bowitz. From the site, one could see a pilgrim traveling the road. Overhead, the sun bakes all. Okay, so the book was set in Utah, but it felt real to me!

Have I written about this place enough? It’s a bunch of dunes literally made from powdered drywall. I think I’m in love. It’s Tatooine, Mars, Arrakis, and Vulcan.

And that was all in just one long weekend. If my former state of Virginia was for lovers, then New Mexico is for romance.