The Olympics are coming up! It’s that rare time when non-professional sports get to shine! As a lover and player of water polo, I get so inspired watching the amazing men and women of the world expressing their mutual disdain through grabbing, elbowing, and splashing in the big pool. Water polo is GREAT.

As I type this, I nurse a bruise from a deliberate kick in the back, some mystery bruises on my arm, and a sprained thumb. I can only hope I gave as good as I got. But really, one of the wonderful things about water polo is the intensity of the violence compared to the mildness of injury. You cannot fall down or run into a wall, and any underwater shenanigans are dissipated by the water. As I have often said, water polo enables to player to express all of the intent, but little of the impact. That’s perfect!

As I have demonstrated again and again, I love art deco design. I love old art deco Olympic posters; they’ve inspired my water polo art before. Water polo is a niche sport, and there isn’t a ton of art out there for it. Additionally, I enjoy contrasting the gentility of art deco design with the brutal public image of water polo. The soft civility of art deco posters in many way jives with how the game feels as a participant—it’s like a big tea party with all of my scantily-clad friends.

So, as we near these (hopefully sewage free but probably not) Olympics, I hope you’ll enjoy my water polo posters. I got inspired when the Olympic Trials were on TV a few months ago, so you can only imagine how much I’ll enjoy the Olympics. 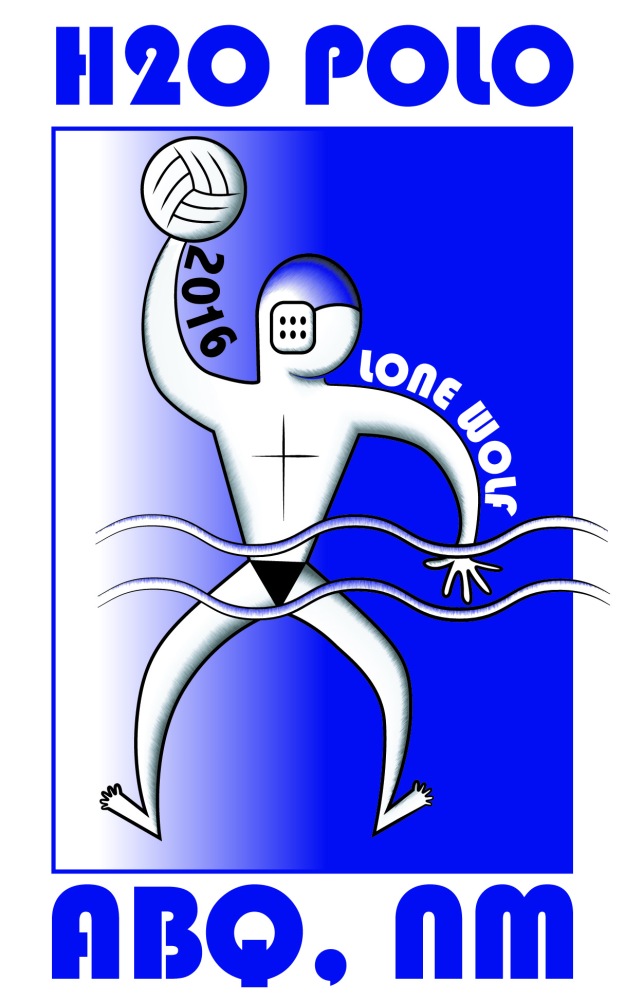 Is there any greater joy in art than seeing a project through and sharing it with others? I designed some water polo t-shirts, and finally they have arrived. They look phenomenal!

Plus, it’s a great joy to design for water polo. It’s a small sport. Maybe you’ll see a neat poster for the Olympics, but that’s about it. The women’s game is especially short on designs. This year, I took my design inspiration from art deco sports posters and the National Parks vintage poster series.

I wanted to convey the sense of motion I like in the art deco posters. The curve of the water surface suggests energetic water. It could also suggest the curve of the ocean. 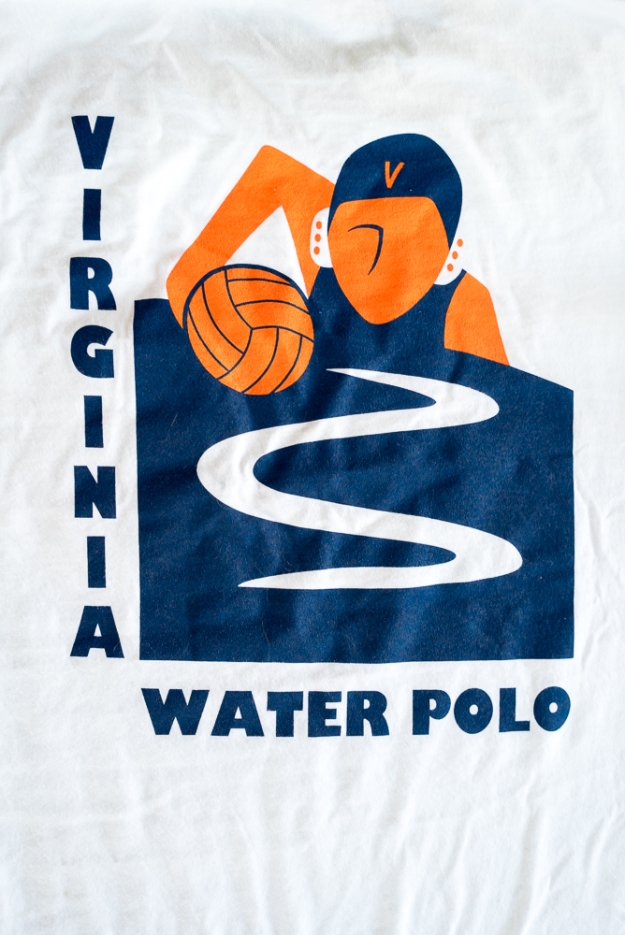 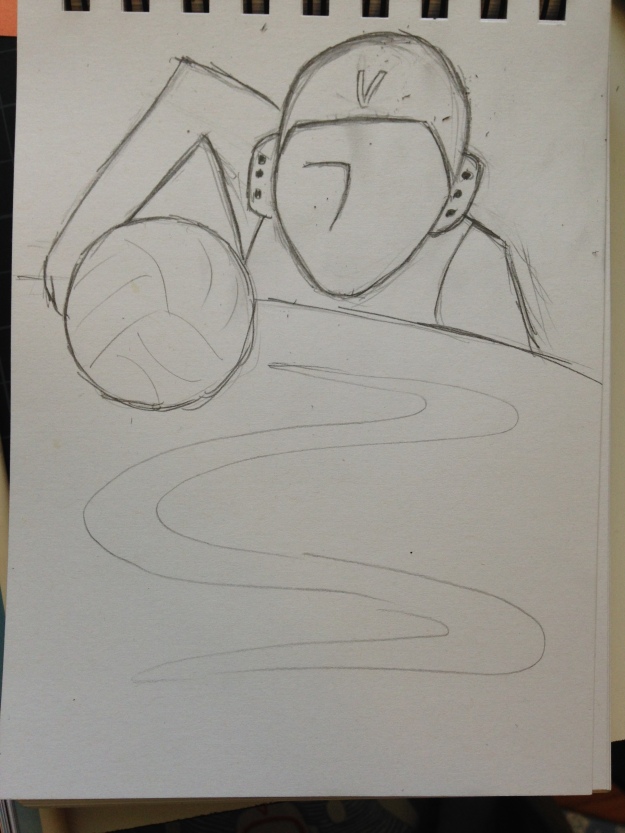 Below: An art deco poster I particularly found inspiring. Early versions of my design incorporated gradients to suggest form, as in this poster. In the interests of simplifying printing, I chose to go with two colors.

Below: an alternate idea. Like basketball, a lot of action in water polo happens at the center position. Unlike basketball, the offender and defender stay relatively fixed, facing away from the goal. The offensive center wants to turn forwards or backwards to take the shot. The defender waits to react. I hoped that the slightly disjointed postures suggested depth or motion.

Design made into a poster. Perusing Wikipedia, I discovered that water polo has a surprising variety of names for a sport invented only about a century ago. 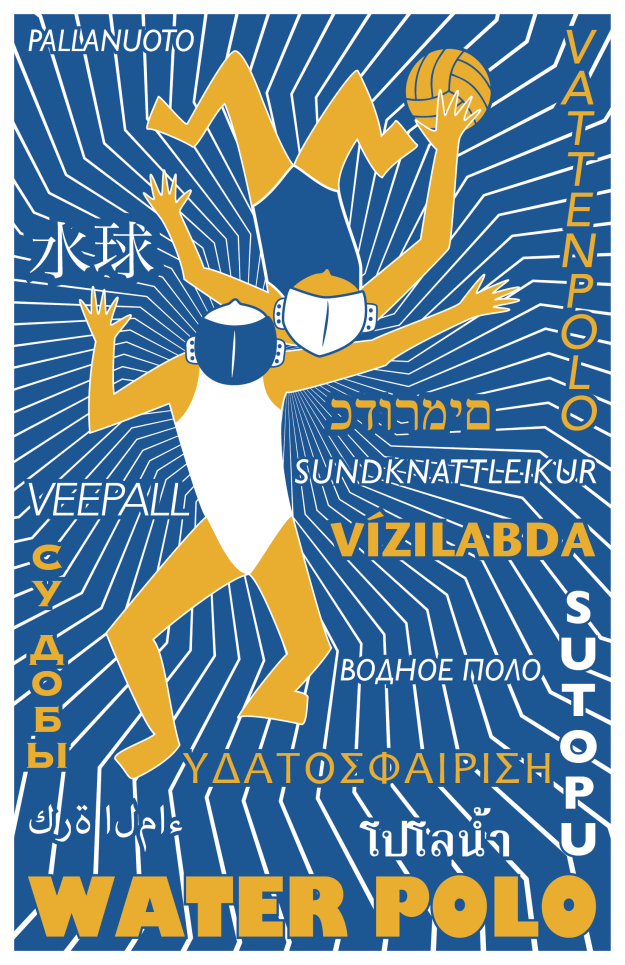 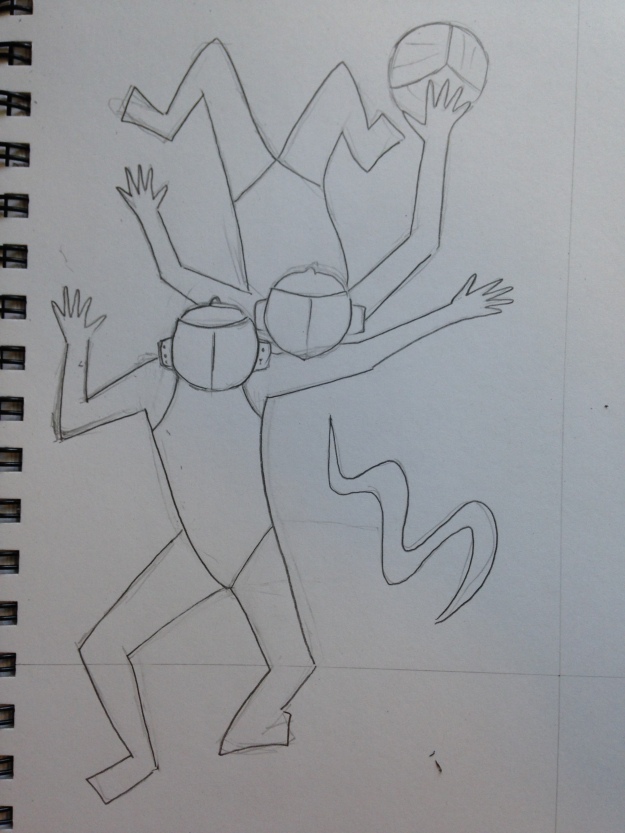 All the teams in our water polo conference, the Atlantic Conference, are in North Carolina and Virginia. Three out of the five are close to the Blue Ridge Parkway, and none are coastal. This gave me the idea that the conference could be thought of as the Blue Ridge Conference.

The championships this year were held in Charlottesville. Humpback Rocks are a popular hiking destination along the Blue Ridge near Charlottesville. People often hike Humpback rocks at sunrise to get the view of the Rockfish Valley. This fell quite naturally into a vintage style poster look.

This design was a super rush job. I drew the sketch at 10PM before the deadline the next day. The next morning I vectorized it. The shirts arrived a week later. I probably now would choose to make the figure white, for better clarity at a distance, but I still like the design.

They didn’t go for my conference renaming. =P 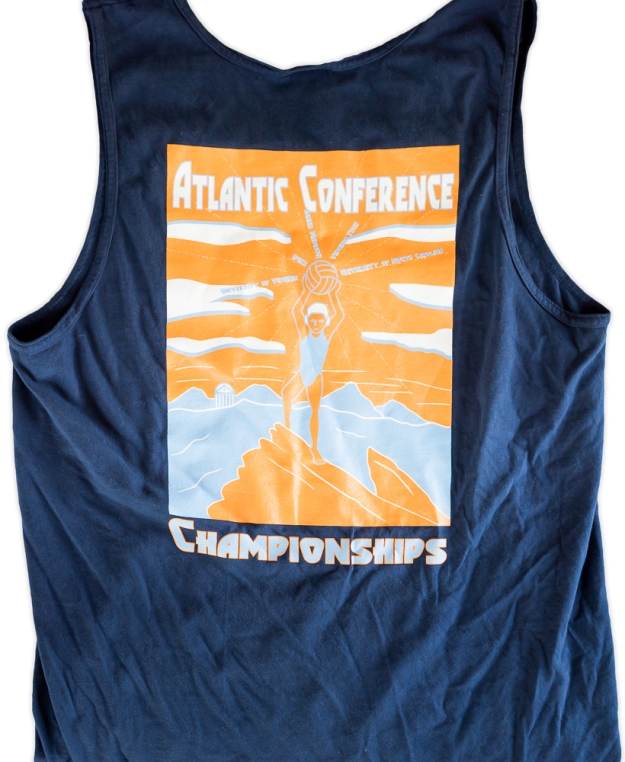 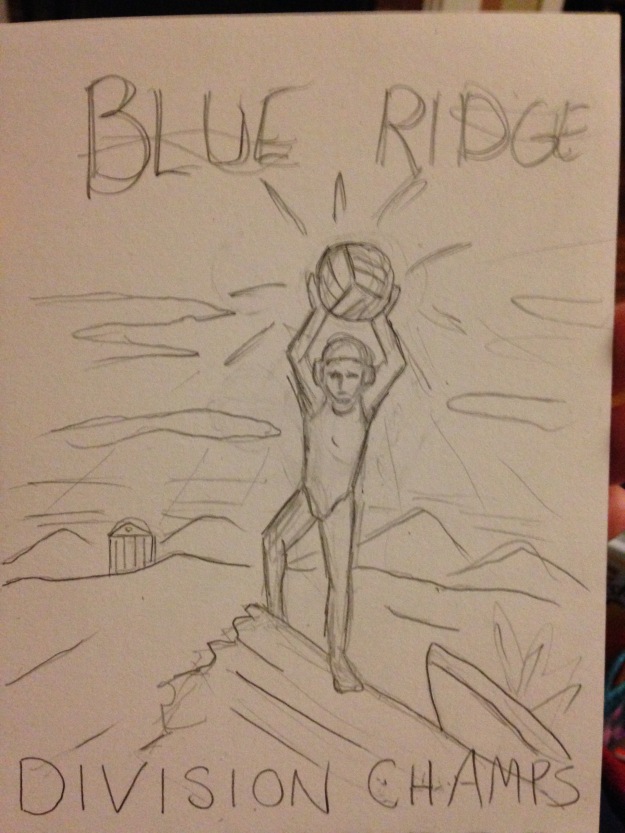 One of the national parks posters that inspired this design.